I was greeted by a full moon when I arrived in Cappadocia the first time. We stopped at the roadside and walked up to some strange-looking tall cone-like shapes. I could not see much in the darkness but what I saw was otherwordly, literally. I didn’t seem to be on the planet Earth anymore. That’s all I can say about that night. The next morning I woke up in a cave, albeit in a luxurious one with modern facilities, opened the door to outside terrace and there were huge colourful balloons floating over the landscape in front of me, I had not seen anything like that before in my life. I was still in another world it seemed… 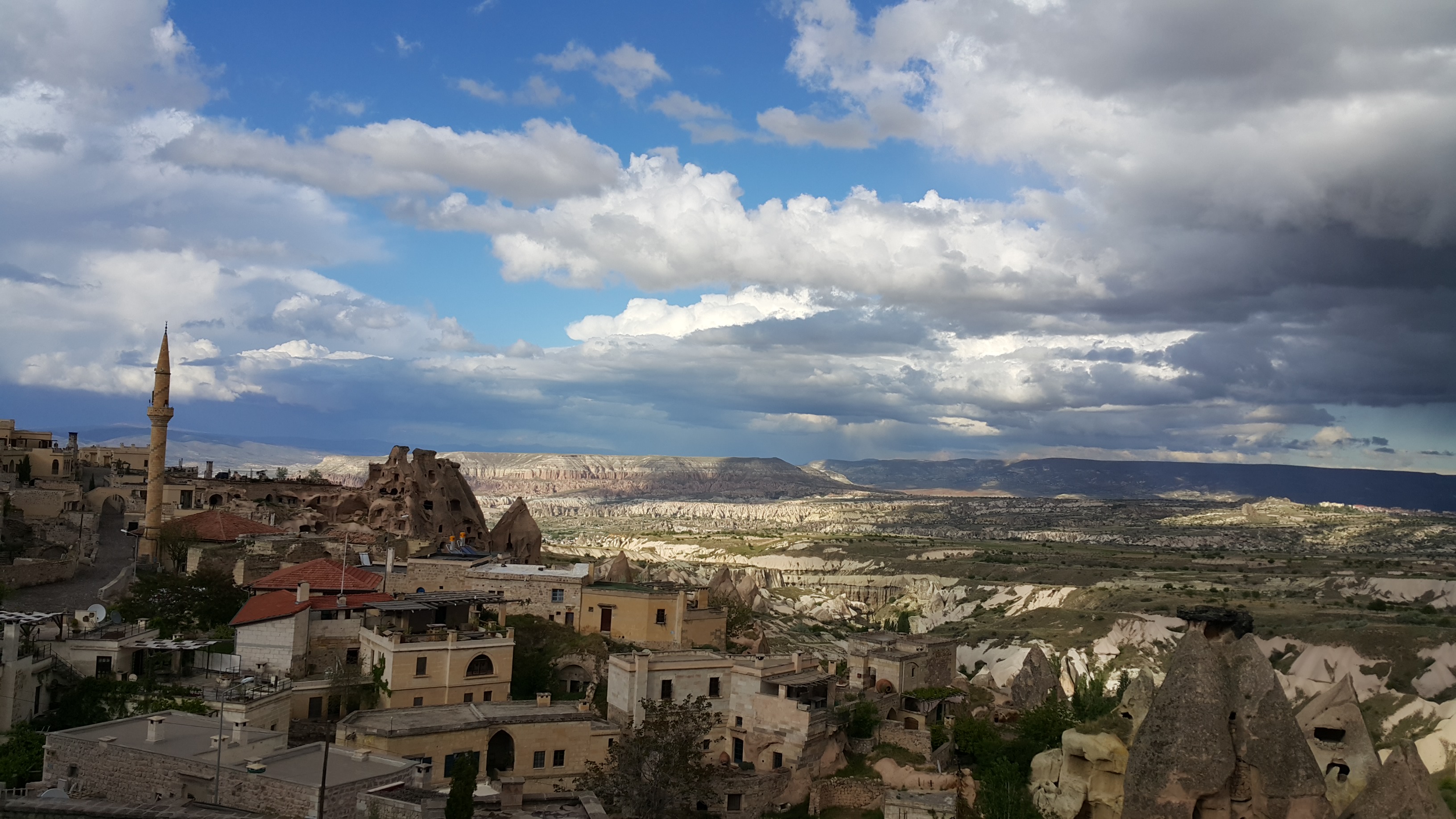 View from Uchisar over the Pigeon Valley

But of course people are very adaptable, and soon my surroundings became familiar to me. It became normal that I lived in the cave, that there was an ancient tunnel starting from the bathroom, stretching several kilometres and intersecting with other underground tunnels from neighbouring caves. It became a matter of fact to take my meals on the terrace with incredible vistas beyond the village, the colourful valleys beneath me and a lone snow-capped mountain far in the distance. That village was Uchisar, hosting the highest point in Cappadocia – the odd-shaped structure, called the castle, at the top. 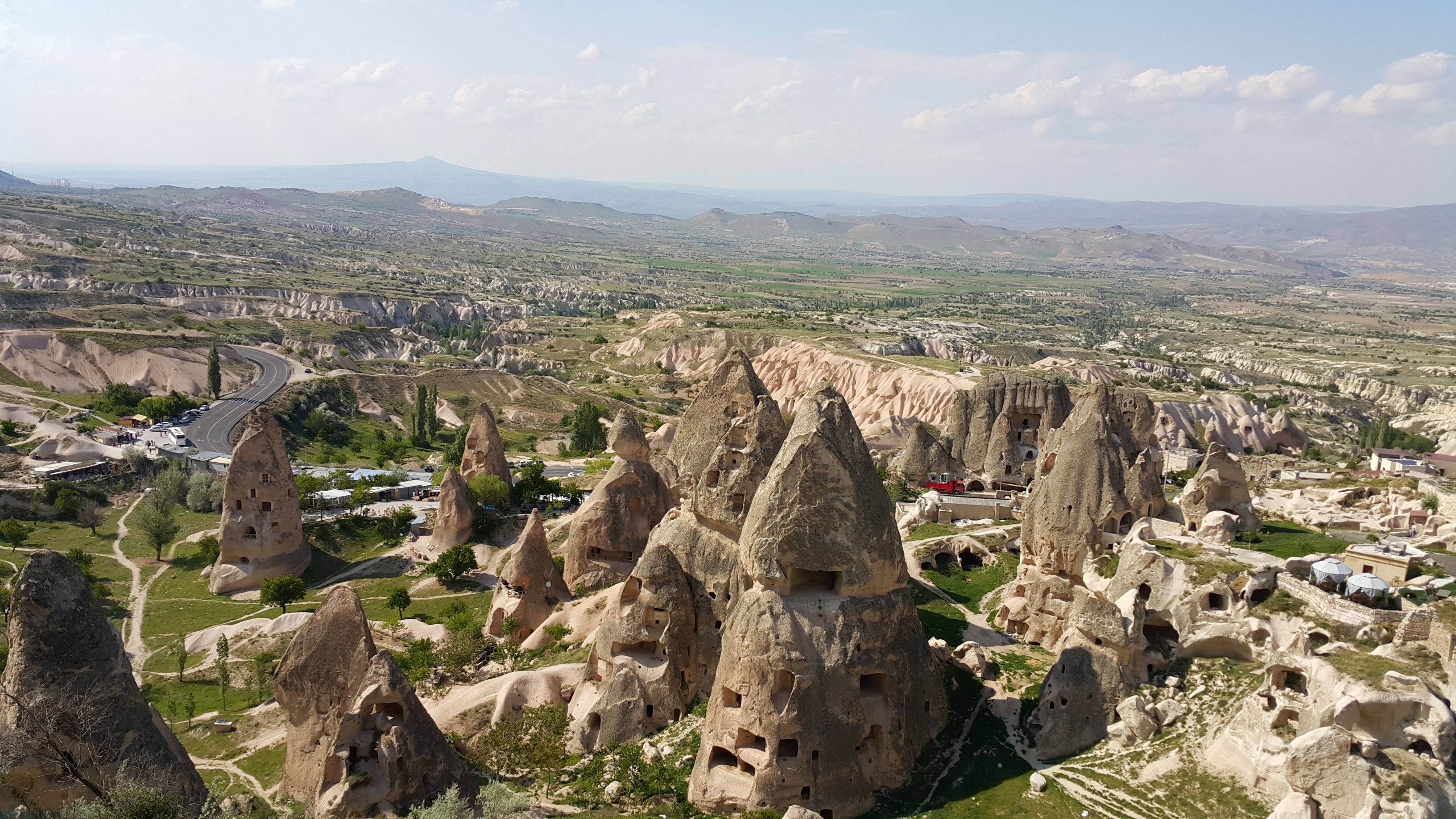 Our walks down to the valley usually consisted of me admiring the surreal landscape around us, while Tolun focussed on inspecting and watering his precious trees he had been planting along the valley. The hot dry summers in the area can be tough on young trees, especially if their fresh leaves and branches are chewed by sheep or goats meandering around. While spring brings nourishing rain and the flowers and trees blossom, it is the relentless heat of the sun that rules the summers. Autumn comes with cool airs again, turning into chilly and snowy, but bright and sunny, winter as the time goes by. 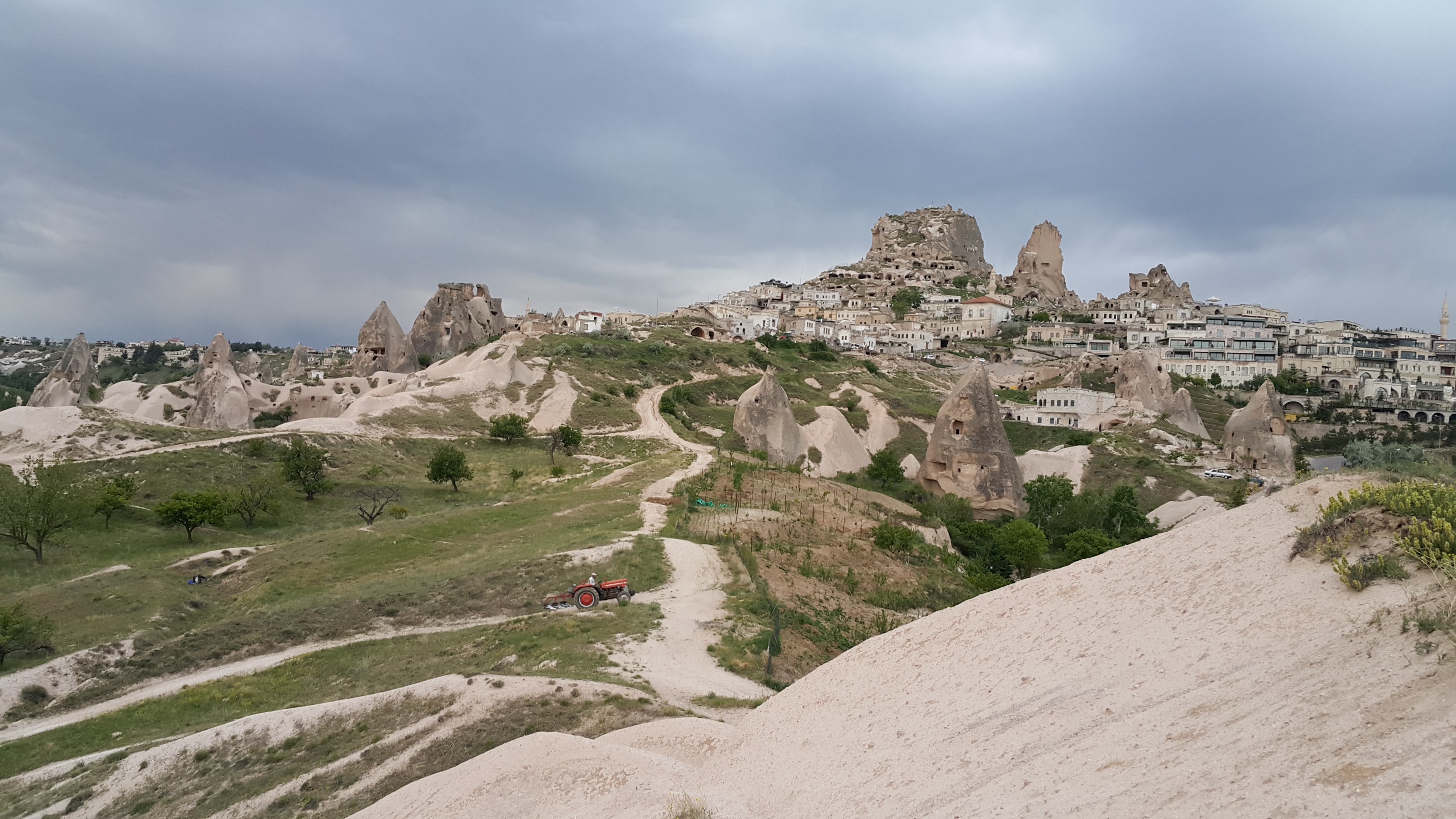 View to Uchisar village from the Pigeon Valley

Sometimes we would walk along the valley from Uchisar to Göreme. It is a good one-hour walk and because of the fantastic surrounding landscape, one might wish it was even longer. In Göreme we would visit the UNESCO heritage open-air museum with colourful painted churches dug into rocks by early Christians, who were hiding here from Roman persecutions. The soft rock – called tuff – is a result of ancient volcano eruptions. Over the time the ashes hardened and continued to be shaped into fairy-chimneys and gorges and valleys by the nature. Later people began to dig their dwellings and storage places and pigeon holes into rocks. In Uchisar the valley in front of our terrace is called Pigeon Valley as there are many pigeon holes dug into rocks by people who wanted to collect pigeon manure as a rich fertilizer for their farmlands. I climbed up to one of those cones and saw a hollow room inside, small shallow shelves dug into insides of the walls, supposedly for pigeons to rest there. As for the wildlife, besides beautiful pigeons, I have seen many swallows nesting and teaching their young ones to fly, turtles quietly going about their business in the bushes, and some not so wild cats and dogs basking in the sunshine. 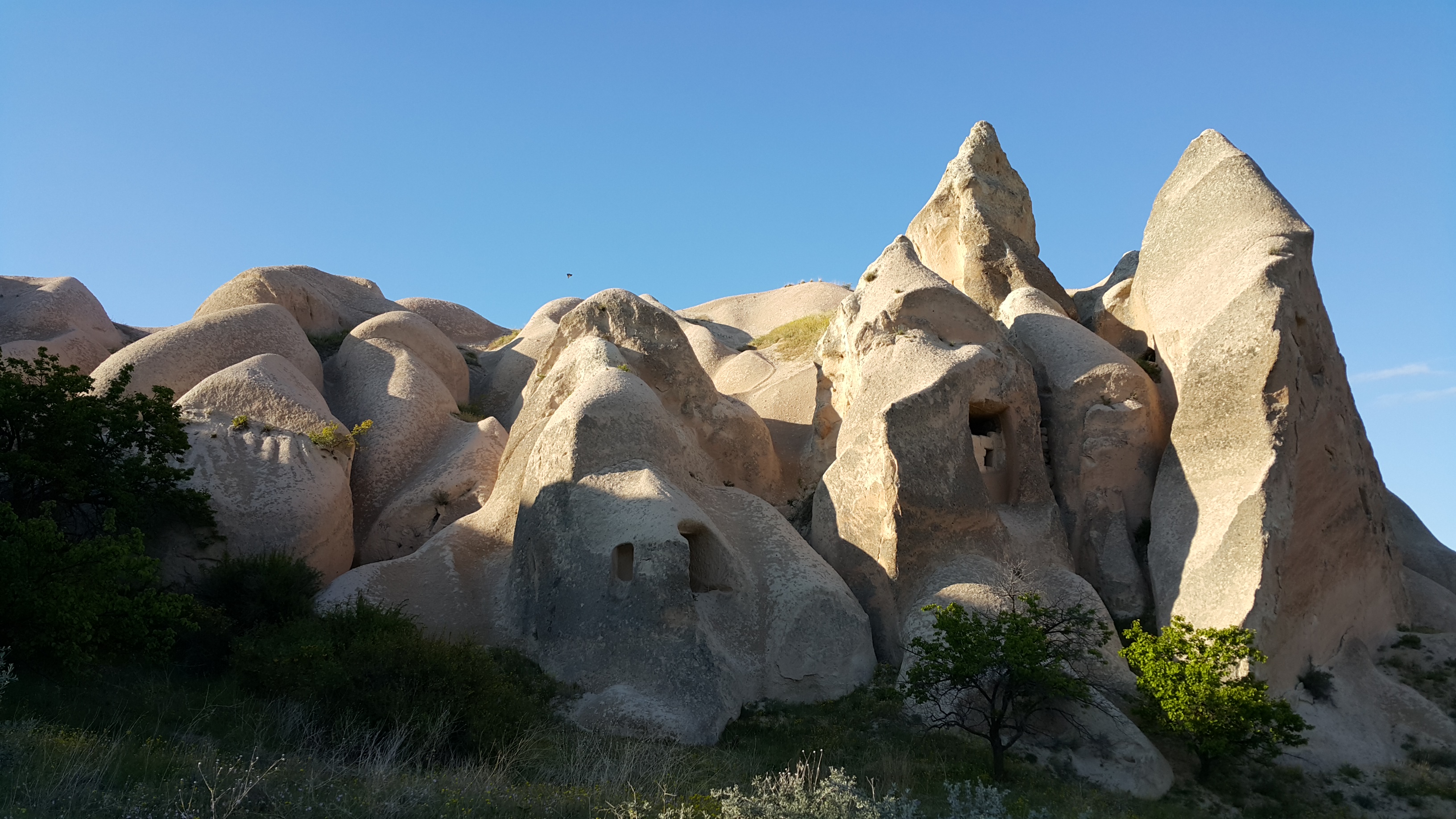 Uchisar itself is a quiet village with plenty of small luxury cave hotels and handicraft and food shops and cafes and restaurants. For majority of the tourists, the castle seems to be the main attraction here, but for me it is the nature surrounding the village that touches me the most. 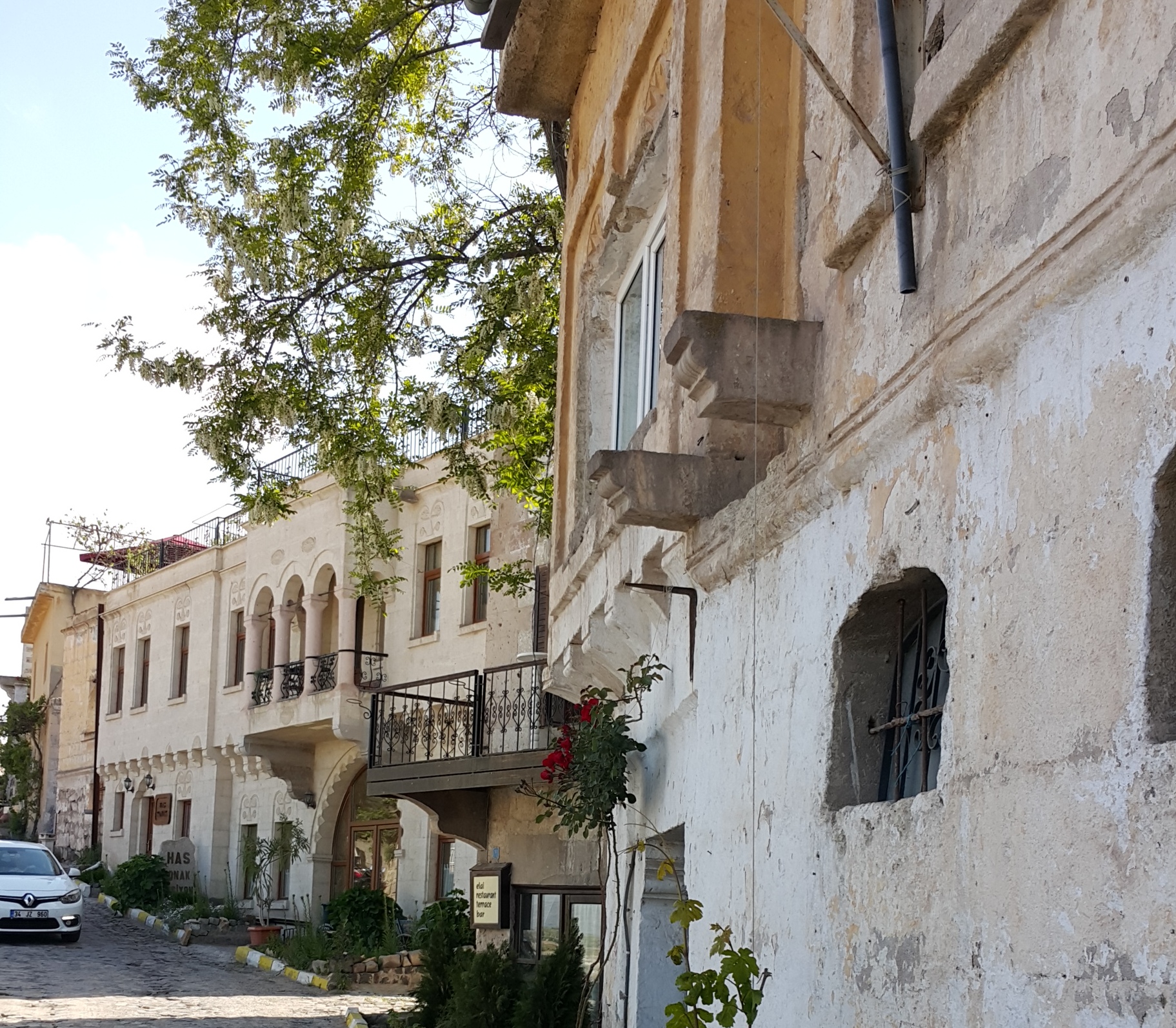 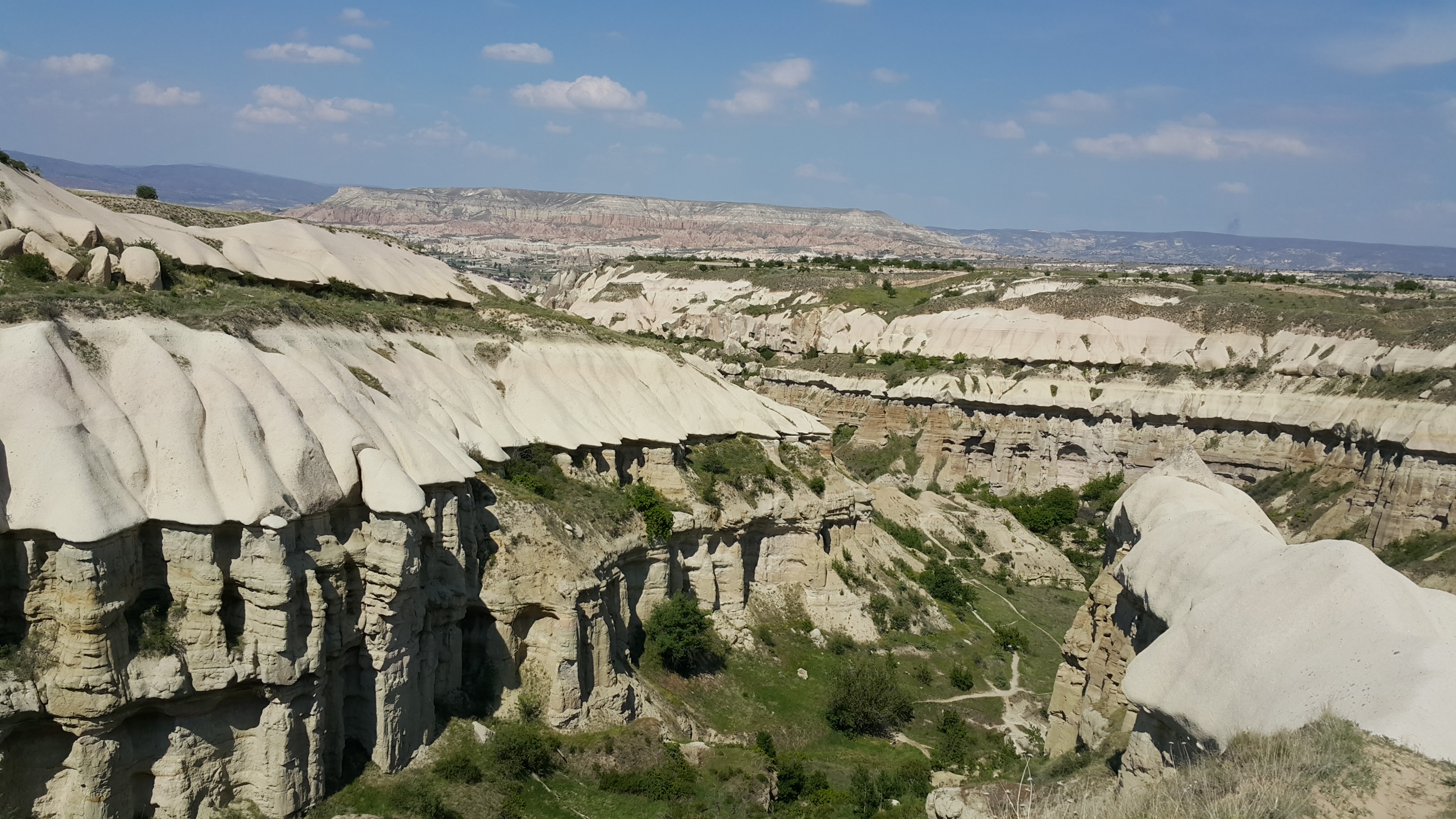 View towards Göreme from Pigeon Valley 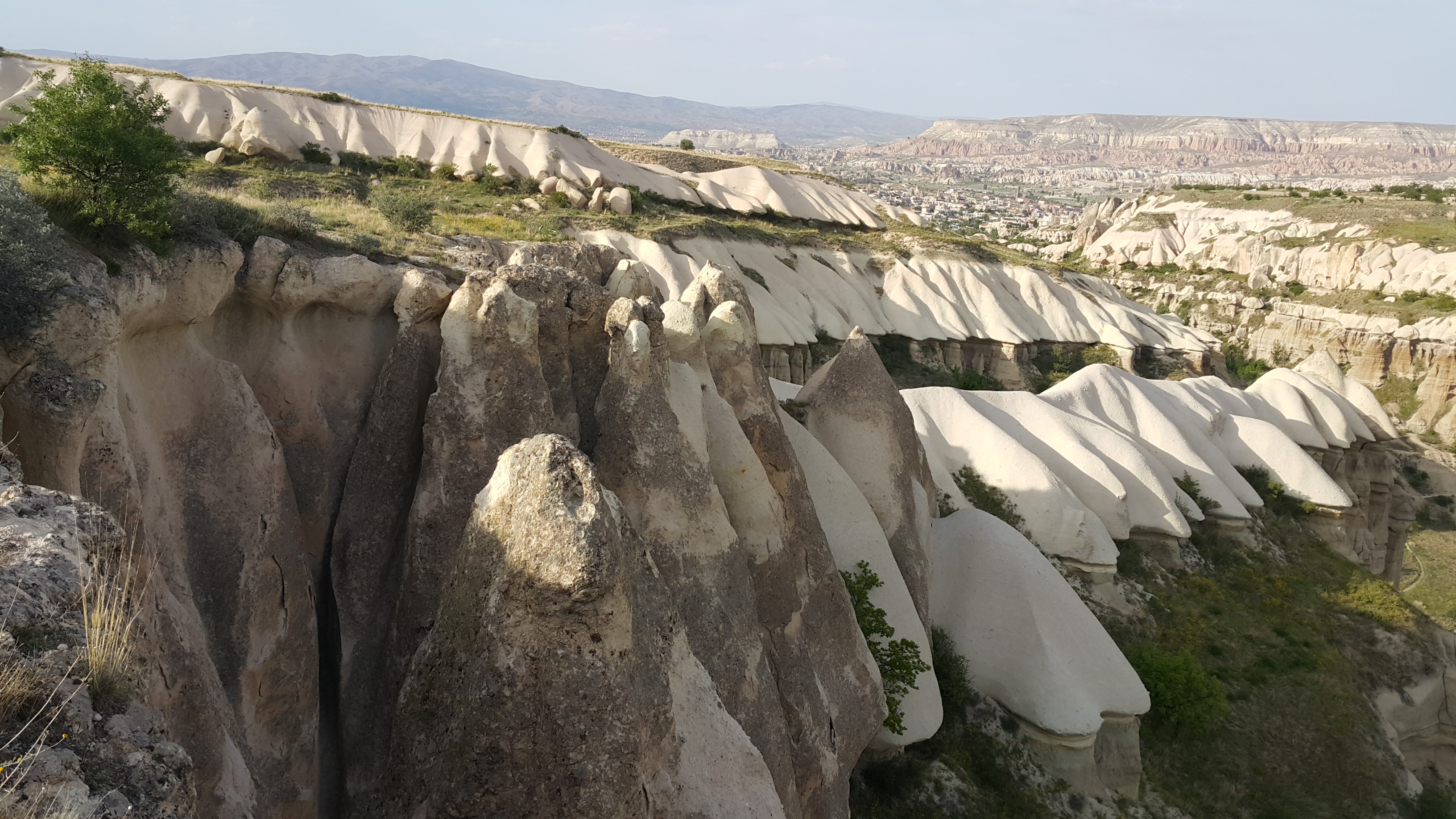