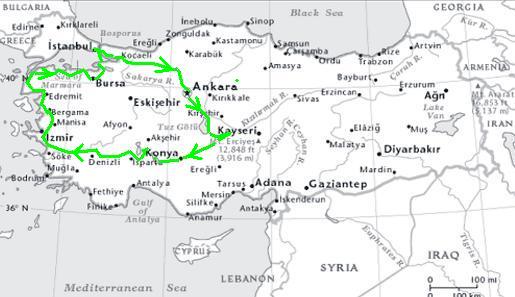 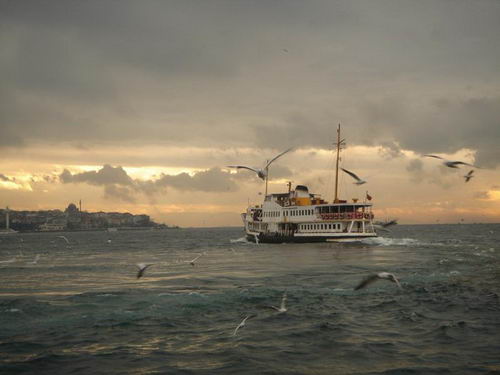 Day 1. Istanbul; I will meet you on your way out from the airport with a sign indicating your names. After a short briefing about our guided tour we will drive to the historical part of the town and take a stroll around the Grand Bazaar and wander through the exotic sights. Overnight in Istanbul.

Day 2. Istanbul; Early check out after breakfast. Visit the historical peninsula. The ancient hippodrome, Blue Mosque, Topkapi Palace, Basilica cistern are some of the highlights in this area. Embark the boat for a cruise on the Bosphorus. Disembark on the Asian side and drive to Ankara. Orientation tour and staying overnight in Ankara.

Day 3. Ankara – Cappadocia; Visit the Museum of Anatolian Civilizations and Ataturk’s Mausoleum. Proceed to Cappadocia. Uchisar village and Pigeons Valley will be our first stop in long summer days, if not we will proceed to Red Valley to catch the sunset. Sleep in a small Cappadocian village.

Day 4. Cappadocia; Surrounded by Cappadocia’s “fairy chimney” rock formations, we will walk to the village of Goreme through valleys. Drive to the remote Valley of Onions lying at the end of a silent canyon. While driving there we will make stops in villages and vineyards where we will find fresh fruit and meet local people. When we will get to the valley we will explore the underground dwelling places of the ancient Christian monks and interpret the biblical frescoes found inside the rock dug churches. On our way we will visit Mazikoy underground city. Staying overnight in Cappadocia. 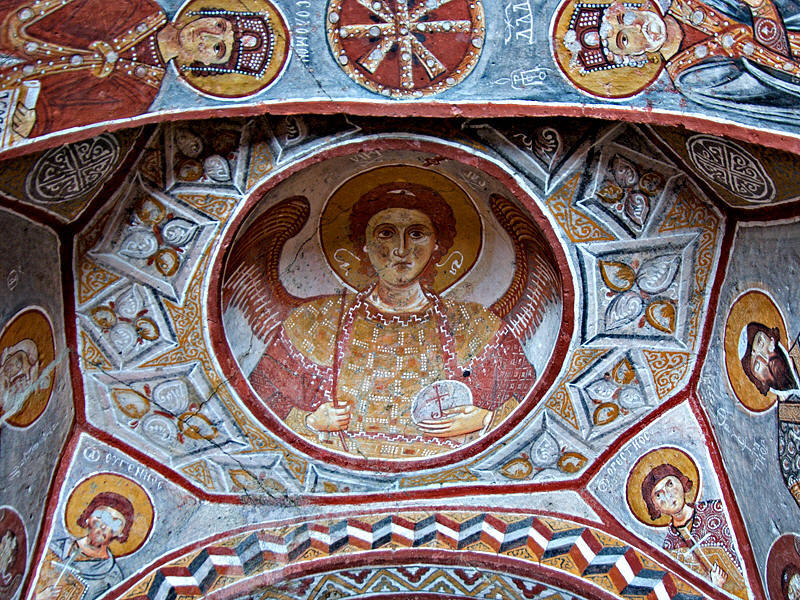 Day 5. Cappadocia – Konya; After breakfast we will visit Pasabag where you will see lots of mushroom rocks or so called fairy chimneys. In Cappadocia we will also have the opportunity to see traditional workshops where women weave carpets, men carve stones or make pottery. Our tour will proceed by the Ihlara Valley where the nature created a canyon of an extraordinary beauty. While exploring this canyon we will discover churches carved in the rocks. Konya, the capital of the old Seljukian Empire, will be our next destination. On our way we will visit an old Caravanserai from the Seljukian times. We will stay overnight in Konya.

Day 6. Konya – Egirdir; This morning we will explore Konya. Our first stop will be Karatay School where a higher education was given to the Seljukian youth in many fields including even the Astronomy. Mevlana’s world wide famous dervish monastery will be our next stop in Konya. We will proceed to Beysehir in the afternoon. In Beysehir we will visit the Mosque of Esrefoglu located by the Beysehir Lake. This mosque was entirely made of wood and has a very particular atmosphere. Our final destination will be Egridir today which is a small town located by the lake of Egridir. We will stay in a hotel by the lake.

Day 7. Egirdir – Pamukkale – Ephesus; We’ll drive to Pamukkale today, famous for its calcified cliffs and historic Roman ruins. While there, you’ll have time to swim and soak in a natural spring pool amid Roman columns. After Pamukkale we will proceed to Aphrodisias through high plateaus and hills. As we will start strolling among the ruins you will be surprised to see such a heritage in the middle of nowhere. Aphrodite being the main deity in this old city of love was highly appreciated. Especially by desperate lovers coming from around the world to beg her to send her child Eros to hit their loved ones by a magic arrow which would make them fall in love with each other. You will see Eros carvings at every corner here. Especially the ones in the multifunctional odeon are remarkable. Towards the end of our visit among pomegranate and pear trees and tobacco fields you will find a fantastic stadium with capacity for 30.000 people dating from the 1st century AD. This is the best preserved stadium you can see in all of Turkey. Our next destinations are Miletus and Priene – two remarkable ancient Ionian sites. We will walk among the ruins while I explain you the historical and archaeological beauties of these two fantastic sites. After a long day in Priene I am sure you will still want to see Alexander’s House, the gate of the pier, Athena temple and the best preserved Greek theater in Turkey with a capacity of 6500 people. We will proceed to Ephesus and stay there overnight.

Day 8. Ephesus – Pergamon; Visit Ephesus which was a metropolis of Asia Minor during late Hellenistic and Roman times. Darius baths, the bouleterion, the prytaneion, Domitian street and the fountains, Celsus library, the Agoras and the great theater are just some of the places we will see here. We will drive by the ruins of the ancient Artemis temple, one of the seven wonders of the world in the Hellenistic period and stop at the nearby museum housing the exquisite archaeological findings from the nearby site. Pergamon will be our next destination. We will stay overnight in Pergamon.

Day 9. Pergamon – Troy; This morning we will climb to the Acropolis of Pergamon where we will see the ancient city walls, the Hadrian and Athena Temples, the remnants of the famous library which contained manuscripts made of Parchment paper, the unusual Greek style theater which resembles an eagle’s nest, the little tiny temple of Dionysus located nearby, the promenade alley and the remnants of the Zeus Temple which was another one of the seven wonders of the world during Hellenistic period. Later on we will proceed to the ancient medical centre Asclepion where patients were healed by natural methods and medicines. This visit to Asclepion will make us understand the importance of good morale and natural medicines in saving human lives. In the afternoon we will proceed towards Ayvalik. Going northward we will see olive trees along the right side of the road and the Aegean sea on the left. That will be our main panorama all the way up to Troy located at the south of the Dardanelles. A strait which was a key point during World War I. After having listened to the stories of the Trojan war we will make our way to Canakkale, a charming quiet town situated in the Dardanelles. Staying overnight in Canakkale.

Day 10. Canakkale – Bursa; Visit Canakkale and departure for Bursa, the first capital of the Ottoman Empire. Prusias the second, the king of Bithynia, got the city walls built for Bursa, following a suggestion from Hannibal who had fled Carthage after the second Punic war. We will visit the tombs of

Osman Bey, the founder of the Ottoman Empire, and of his son Orhan Bey located at a nice park outside the outstanding city walls partially restored at that part of the town. The Green Mausoleum and the Green Mosque are two beautiful monuments located in an area called Green, on the cable car station road. In fact this area which hosts these two beautiful monuments of the early 15th century is quite green with hundreds of years old plane and chestnut trees. We will also visit the Ulu Cami (the great Mosque) one of the earliest examples of the Ottoman Mosques and the biggest in town, the covered bazaar nearby and a silk market located at an old 15th century hotel and much more. Staying overnight in Bursa.

Day 11. Istanbul – Nicea – Buyukada – Istanbul; We will depart for Istanbul via Nicea, where Constantine the Great arranged the meeting of the first Ecumenical Council in 325 AD. We’ll visit the Senate’s Court and the St. Sophia built by Constantine the Great. Visit to Hannibal’s tomb will follow, he commitеd suicide by taking poison when Rome demanded his surrender. Our next destination will be Bostanci pier to take a boat to one of the Prince’s Islands called Buyukada which is the biggest among other Prince’s Islands. We will take a horse carriage tour here around this beautiful serene island which has an extraordinary atmosphere with the charming old wooden villas and green north Mediterranean plantation offering generously their fantastic fragrances to us. We will navigate back to Istanbul according to your time schedule and I will end my guiding services here.