The region is situated in the Southwest corner of Turkey between the bays of Fethiye and Antalya. Extending out of the Mediterranean is the ‘Teke’ peninsula, also known in ancient times as Lycia. It is one of the most interesting ancient regions of Anatolia, its features include the local customs of the time and a style of funerary architecture which is quite unique.

All Lycia’s major cities are on the coast or in the Xanthos and Arycandos valleys. These valleys were later the true heart of Lycia.

The Lycians always held a definite place among the various races of Anatolia, freedom and powers. They were the last in Anatolia to be incorporated as a province in the Roman Empire.

The Lycians had a language and characters of their own which currently are being translated into modern languages, most of them are tomb inscriptions.

Who are the Lycians?
We know from Hittite cuneiforms that the nation of Lukka could not be different than the Lycians. The land of Lukka was conquered by the Hittites during the reign of king Suppililiuma in the mid 14th century B.C. They fought against Egypt in the ranks of the Hittites during the battle of Kadesh in 1284 B.C. They possessed powerful sea and land forces by the second millennium B.C. and had already established an independent state.

Lukkas were mentioned among Egyptian texts as searaiders, we would have placed them also in Lycia. It was recorded by Heredotos that the Lycians originally came from Crete and for a time they kept their name as Termilae. According to legend, when Lycus, son of Pndionthe king of Athens, was expelled by his brother Aegus, he joined Sarpedon and they took the name *Lycians’ from him.

Heredotos noted that the Lycian customs are partly Carian and Cretan, but one custom is unique to them – their lineage is not by the father, but from the mother’s side (matriarchal family).

Homer mentions the Lycians in ‘The Iliad’and tells that during the Trojan War, under the commanders Sarpedon and Glaukos, they battled heroically on the side of the Trojans against their enemies the Achaeans.

The Persian king Harpagos conquered Lycia in 545 B.C. In 480 B.C. when the Persian king Xerxes assembled his huge force for the conquest of Greece, the Lycians contributed with fifty ships to his fleet.

Persian rule ended when the region fell to the Macedonian king Alexander the Great in 333 B.C. When he crossed the Hellespoint and landing in Anatolia, Alexander defeated the Persian forces in battle fought at Granicos in the year 334 B.C.

In 309.B.C., after Alexander’s death, Lycia came under the power of his General Ptolemy, who had established himself as the king of Egypt. Ptolemaic control continued for about a hundred years, and it was during this period that the Lycian language died out and was replaced by Greek.

In 197 B.C. Lycia was taken from Ptolemias by Antiochos III, the king of Syria. He was shortly afterwards defeated by the Romans at the battle of Magnesia.

Lycia was given to the Rhodians in 189 B.C. who supported the Romans. In 167 B.C. Rhodian rule ended and Lycians became free.

During the Roman Civil Wars of the first century B.C. the Lycians again had to suffer from the depredations of Brutus and Cassius. The ‘trannicides’ were responsible for the assassination of Julius Caesar in 44 B.C.

Upon the Lycians defeat at Phillipi in 42 B.C. by Anthony and Octavian, Anthony received the East as his share of the Roman world and confirmed the freedom of Lycia.

Even under the Roman Empire, the Lycian League continued to function. During this period, the country was prosperous, money was plentiful and huge fortunes could be obtained by private citizens.

The boundary of Lycia was extended to the Northwest to include the Carian city of Caunos.

In the Byzantine period, 4th – 7th centuries A.D., Christianity increased in the region and Christian buildings were constructed throughout the land.

There are three reasons that the Lycians have disappeared. In the 8th century A.D. Lycia suffered attack from Southern tribes and vanished from history. Earthquakes and disease are the other factors to their disappearance.

Today Lycia is famous for its majestic snow capped mountains, sweeping down to blue waters of the Mediterranean and for its unique historic sites, most of which you can still visit today.

The ruins of the ancient city of Myra are 1.5 kilometres North of Demre. A distinguished country town, important with its green houses and as a marketing center for fruits and vegetables.

In addition, it is of interest for visitors because of its proximity to the site of ancient Myra.

Although the earliest written references date from the 1st century B.C., evidences from Lukian inscriptions and monuments suggest that there was a settlement here in Myra as early as the 5th of the century B.C. Antiquities of Myra fall naturally into three distinct zones. The first is on the Southwest of the site; it includes the theatre, the so-called Sea Necropolis and the area occupied by the Agora. the second is on the North and it covers the Acropolis, the buildings on it and surrounding walls. Finally, the third one is on the Southeast; it encompasses the river Necropolis and the channel which supplied Myra with water.

In antiquity, the cities of Lycia used to give themselves pompous names. Accordingly, the city of Myra was named ‘the most brilliant’. Actual facts about why this name was given to Myra are given in the following:

Myra’s numerous tomb monuments are extremely impressive. These monuments, on the South of the city, carved out of the soft rock are preserved so far very well. The so-called Sea Necropolis is on the cliff face behind and to the Northwest and the Northeast of the theatre. It contains a remarkable collection of believed to be copy of the dwellings of the early inhabitants of the area. Some have stylised representations of the wooden beams used as roof supports in Lycian houses. A few have reliefs that still bear traces of colour. Inscriptions, where they exist, are usually in Lycian.

Myra used its own coins besides the coins of the federations which were made at its own mints. Coins issued by Myra show that the city’s main deity was Artemis Eleutheria, from a Cybelle the ancient Mother Goddess of Anatolia.

The theatre of Myra in its well preserved condition is brilliant and of large seating capacity (35 consecutive rows of seats). The theatre destroyed by earthquake that devastated the city in A.D. 141, was restored shortly afterwards through the generosity of Opramos of Rhodiapolis. Some time later it was modified so that it could be used as an arena for gladiatorial games. There are six rows of seats above and 29 below the single diazoma. A substantial part of the stage buildings still remains. The facade facing the cavea was richly ornamented with theatrical masks and representations of mythological scenes and personages.

Myra’s seaport Andriace was one of the three most important commercial ports of Lycia. the other two were the ports of Patara and Phaselis. The most important existing monument Andriace is the granary of Hadrian. From the inscriptions it’s understood that ship voyages with different time tables were held from here to other Lycian ports.

Myra’s defence system, having the acropolis as its centre extended as far as Limyra on the East and Sura on the West. The outer walls of the fortification were constructed during the Byzantine period, the inner Lycian walls are of polygonal masonry and date from the 5th century B.C.

The monument which Myra was mostly proud of was the Temple of Free, to which ancient historians refer together with Artemis of Ephesos and Artemis of Perge. In this regard Myra was superior to other cities of Lycia.

Myra is one of the ancient coastal cities of the Gulf of Antalya visited by Paul, Luke and Aristharcus (Acts 27:5/6). It is where prisoners changed boats on their way to Rome in 60 or 61 A.D.

Another point of Myra’s superiority at the Byzantine times was the privilege of having Nicholas as its Bishop (4th century A.D.), one of Christianity’s saints. This fact was also the reason for Myra to have its magnificent church, the Basilica of Saint Nicholas preserved until today.

Source: Plaque at the site of Myra 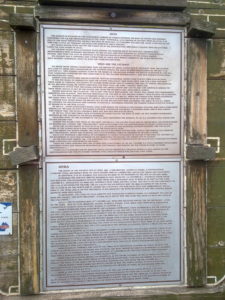 The plaque at the site of Myra