I have visited this gorgeous ancient Greek city twice – both times in the middle of the summer. It is also one of Tolun’s favourite old Greek cities, and he has seen a lot of them.

In order to reach this Ionian town, built in its current location in the 4th century BCE, located 35 km south from Ephesus, one must climb up the hill via stone pathway, which can be quite a challenge in the scorching sun. Once up the hill though, there are plenty of pine trees, offering a welcome respite from the relentless heat. The whole city is a cute compact size, easily explored by foot in the shade of the trees. It was not a big or politically important city, it is estimated that the number of its inhabitants didn’t increase beyond 5000 or 6000 people. Nevertheles, it was a beautiful and wealthy place, full of Hellenistic architecture. 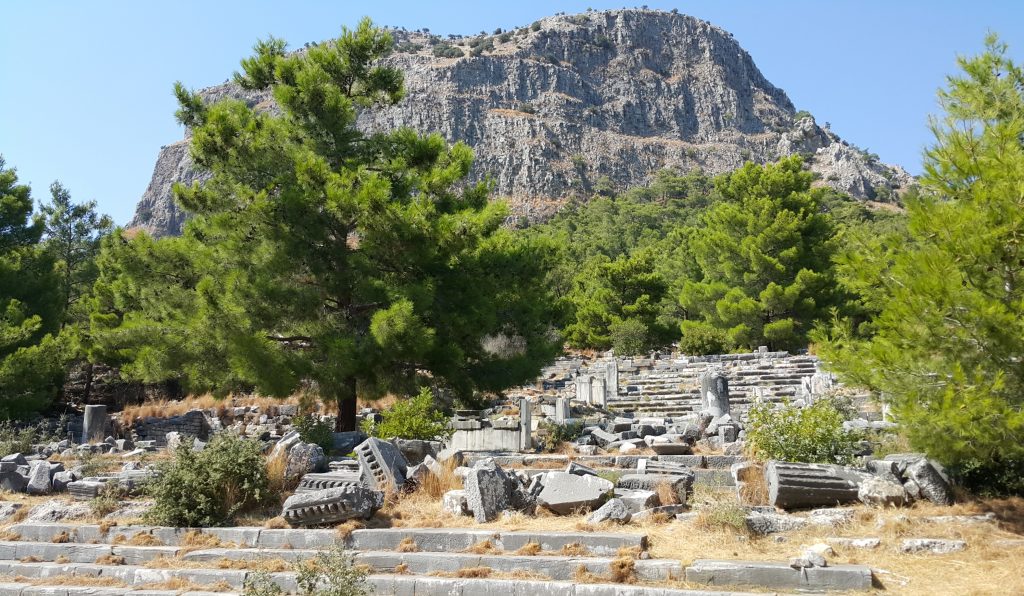 Looking up from Priene city centre towards the mount Mykale

The city was carefully planned, as Alexander the Great himself and the local satrap Mausolus intended it to become a model city. It consisted of four main areas – cultural, commercial, political and religious. The cultural part of the city enjoyed the beautiful theatre, commercial area located the marketplace – agora. Political area housed bouleuterion where city council met and took their decisions about daily life and laws of this democratic city-state. The most important building in the religious area was a temple dedicated to Athena and financed by Alexander, and there were also sanctuaries dedicated to Zeus and Demeter. 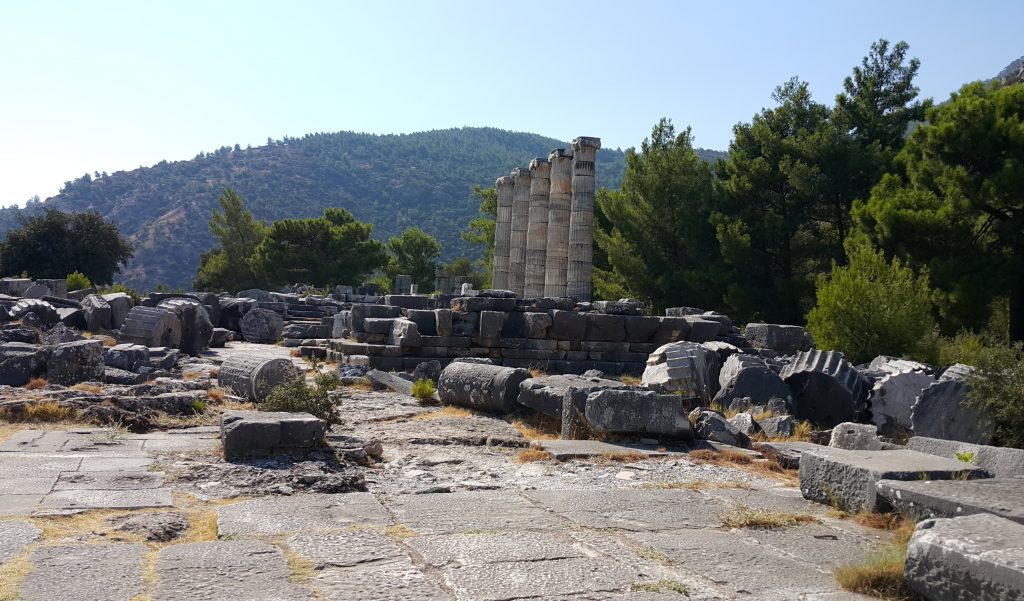 The views both up and down from the city are spectacular. Looking down at the edge of the city, I enjoyed the panoramic expansive vistas across the plains and the Meander river, although the original views were over the sea as the city was built on the slopes along the seashore which now has retreated for over 10 kilometres away. 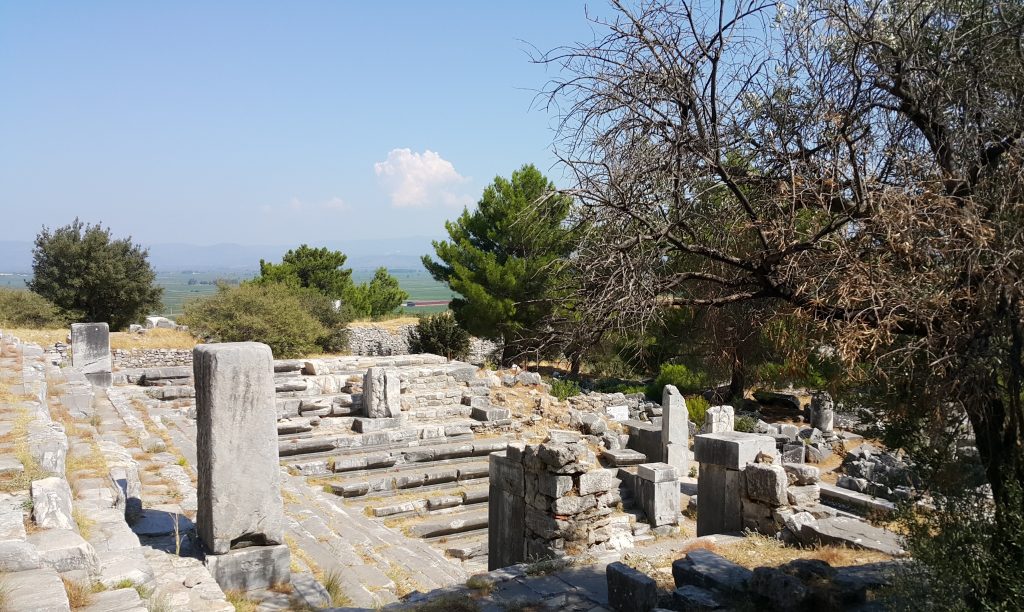 Looking upwards from the city streets I was awed by the huge rock cliff looming just above the town. The citizens of Priene were very lucky indeed to live in such a aesthetically pleasing place. But not only the natural settings are spectacular here, the city itself is remarkably beautiful, built of marble from nearby Mount Mykale quarries. It has paved roads and wide streets, with sewage systems built underneath to keep the town clean and tidy, the carved stone benches and statues flanking the main streets, not to mention the intricately ornamented marble columns around temples and theatres and agoras. The people of this city were wealthy, due to its then seaport location. Many of the private houses were built of marble, had indoor water and toilets which were not common in those days. Most of the marble public buildings were also built with the money from the wealthy citizens.

However, by the 2nd century CE Prienians had abandoned the city for Miletus, located 25 km away. The reason was that over the centuries the Meander river had silted over the seaport and the city’s direct access to sea, which provided the livelihood to its inhabitants, was lost. What remains, is a beautiful ancient city, ravaged only by time… 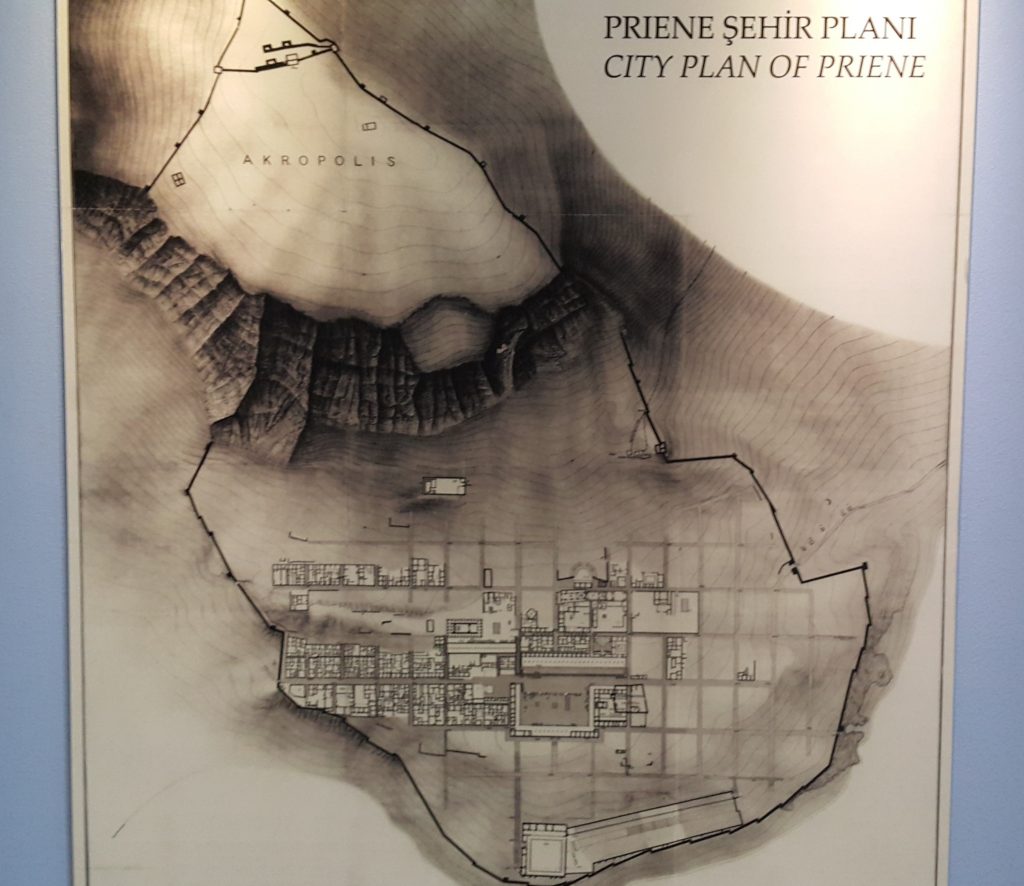