I felt the sizzling heat and while marvelling at the surrounding beauty around and above me as well as beneath my feet, I was also looking for a shade from the brightness of the sun… Cats on the other hand were lounging on the marble pillars and statues, clearly feeling at home, looking sleepily at the tourists passing by… After all, this was the famous Ephesus, a world-renowned ancient city, now a UNESCO World heritage site. I am sure cats were also present in those days when the original residents were going about their daily business. Wouldn’t it be wonderful if some of them were even direct ancestors of the cats who have made the ruins of Ephesus their home today? 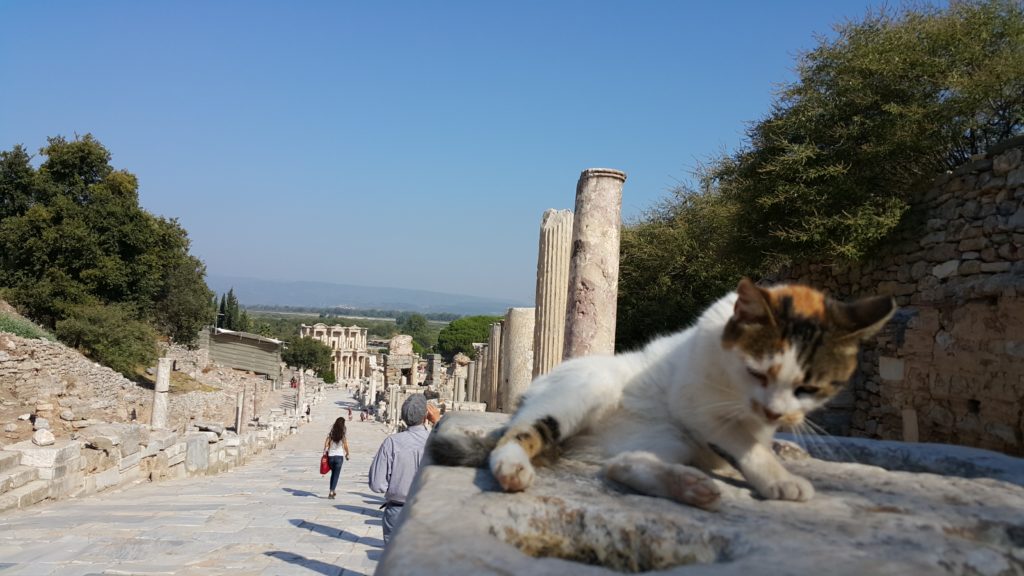 Cats feeling at home in Ephesus

Ephesus has been a remarkable city in many different eras throughout its existence. At first it was one of the twelve cities of Ionian League since 10th century BC. Later it prospered under the Roman rule. It was also a very important location for early Christianity.

Perhaps one of the best known sites here is Celsus library, with its imposing entrance. I was surprised to see that it was quite simple and not very big inside. Nevertheless, it housed nearly 12 000 scrolls. 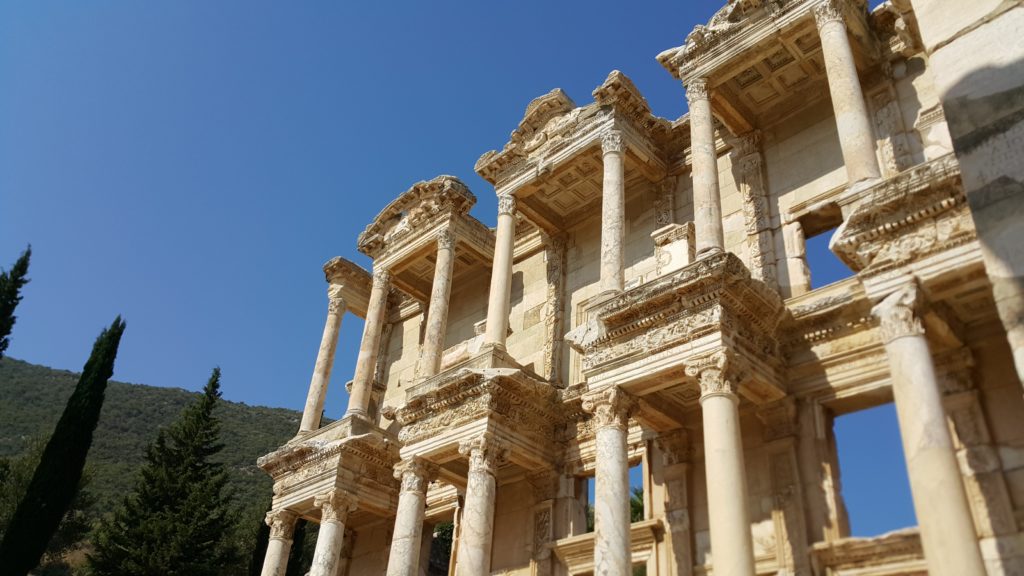 Another well-preserved site is the theatre, once biggest in the world with the capacity to seat 25 000 people. 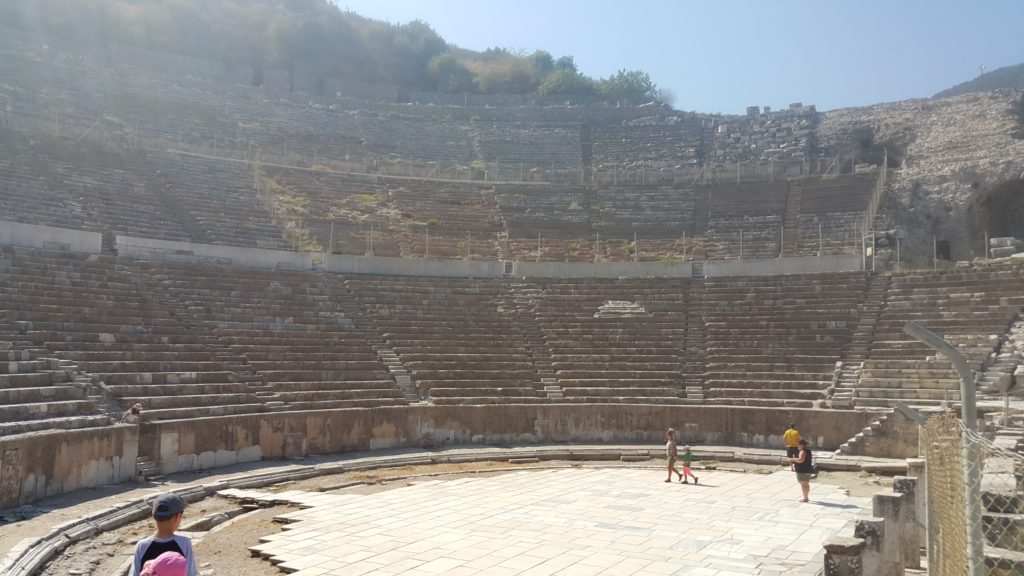 Ephesus is also the home of one of the Seven Wonders of the World, namely the magnificent Temple of Artemis, with its many-breasted Greek-Anatolian goddess Artemis-Kybele. It took more than 100 years to build but unfortunately, hardly anything is remained today.

Other notable sites are the Temple of Hadrian, agoras, bath complexes, an advanced aqueduct system and many other interesting sites and artefacts. 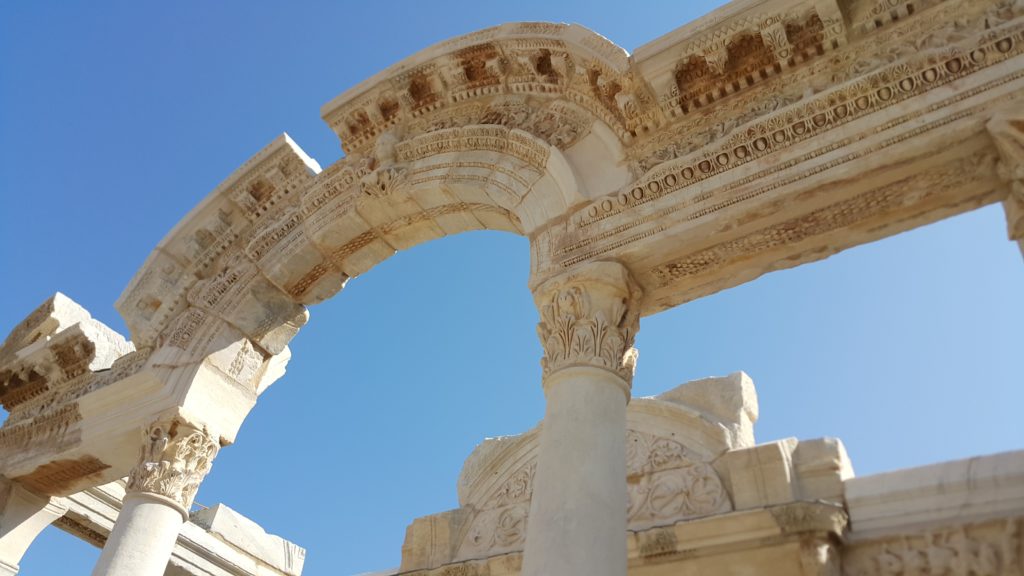 Among other dignitaries of bygone days, Mark Anthony and Cleopatra visited Ephesus. Perhaps the most prosperous era was the time of Augustus when the city flourished commercially and culturally as well as becoming an important administrative centre, governing Western Asia Minor, and being one of the biggest and most important cities of Roman Empire.

From early Christian era, it is thought that Gospel of John was written here and Apostle Paul lived here. According to Roman Catholic Church Mary spent the final years of her life in the house situated near Ephesus. Nowadays it is a popular pilgrimage destination for these reasons.

The city was eventually sacked by Goths, destroyed by an earthquake, and its harbour was gradually silted up by Kücükmenderes river, moving farther from the seaways of commercial ships… all this caused the gradual demise in the end. 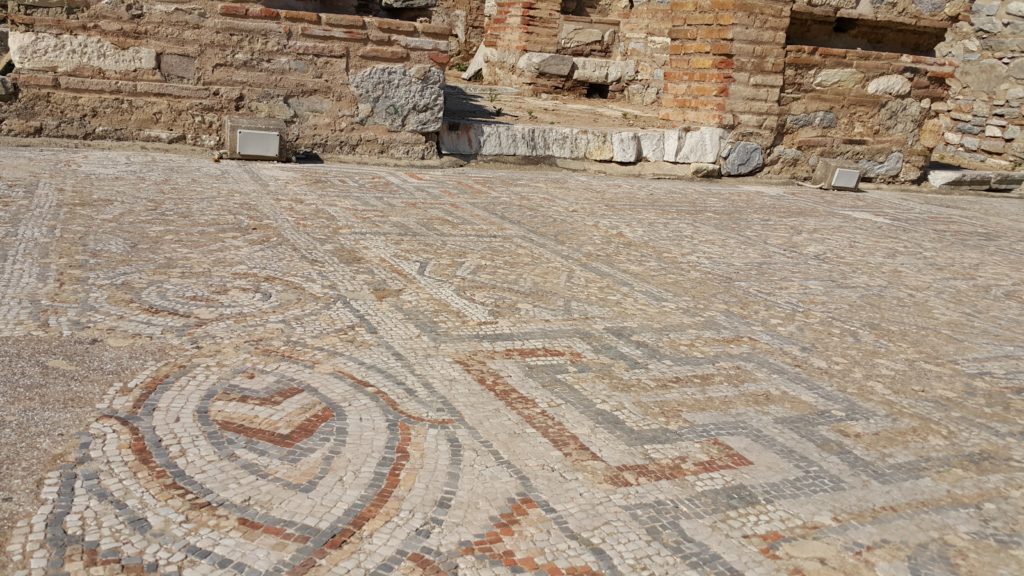 What made the city ‘alive’ for me, besides the iconic cats, were the signs of everyday life in ancient times, like beautiful mosaic floors in private homes, a row of public latrines in the bath complex, the games carved into stone pavements… I could imagine the kids playing on the streets here as if it was just yesterday and people walking at the agoras, choosing fresh fruit and vegetables, bargaining with traders… I have been at Ephesus couple of times but there is still so much I haven’t seen yet. One really must take their time to absorb everything this splendid city can offer. 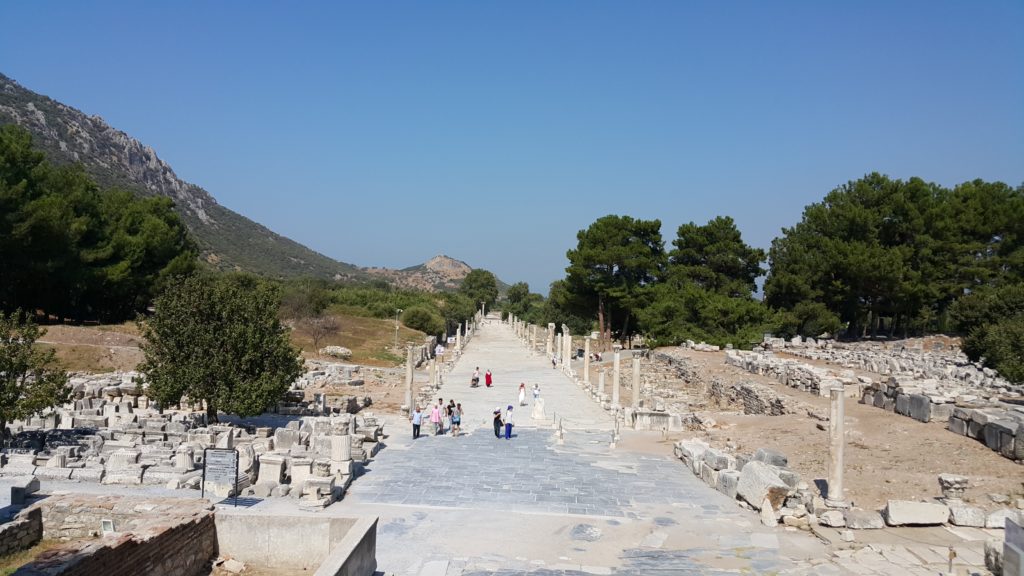 Road to the harbour