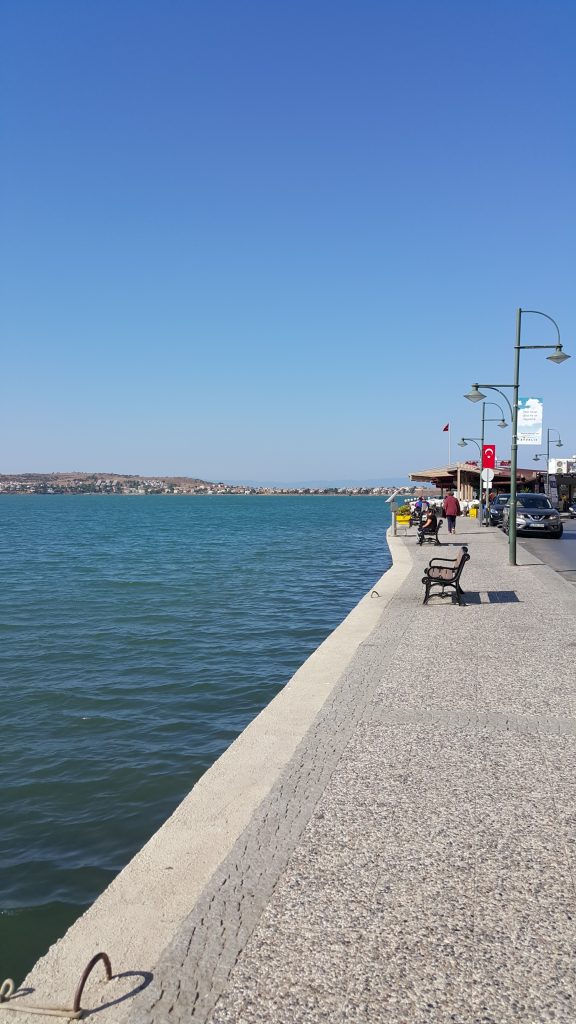 I have become quite a fan of olives and olive oil in recent years since I got the taste of Turkish olives. Now they accompany virtually every breakfast I have in Turkey.

I reminisce about my latest trip to Ayvalik in early October, barely a month ago. Driving through the silver-coloured olive groves, expanding over rolling hills and meadows right up to the seashores, we arrived at the small town of Ayvalik. Its lovely seaside promenade alongside small firshermen’s boats and wooden holiday sailing yachts, moored at the bay, gently swaying in turquoise waters. The popular promenade is lined with cafes and restaurants, small shops and cake and tea houses.

We ventured further from the seaside, climbed up the hill, explored narrow streets with old wooden and stone houses, art galleries, boutique hotels, shops, eateries, homes. There is a beautiful mixture of both Greek and Turkish architecture. Many houses are lovingly restored, many still waiting for restoration. For some reason, I tend to get especially excited to see old dilapidated buildings, still bearing the aura of the bygone days, who knows what kind of stories they could tell, teetering near collapse, but still keeping upright as if to defy the gravity. At the same time I am delighted to see the houses which have actually been restored, painted in bright fresh colours, looking pretty and cheerful. 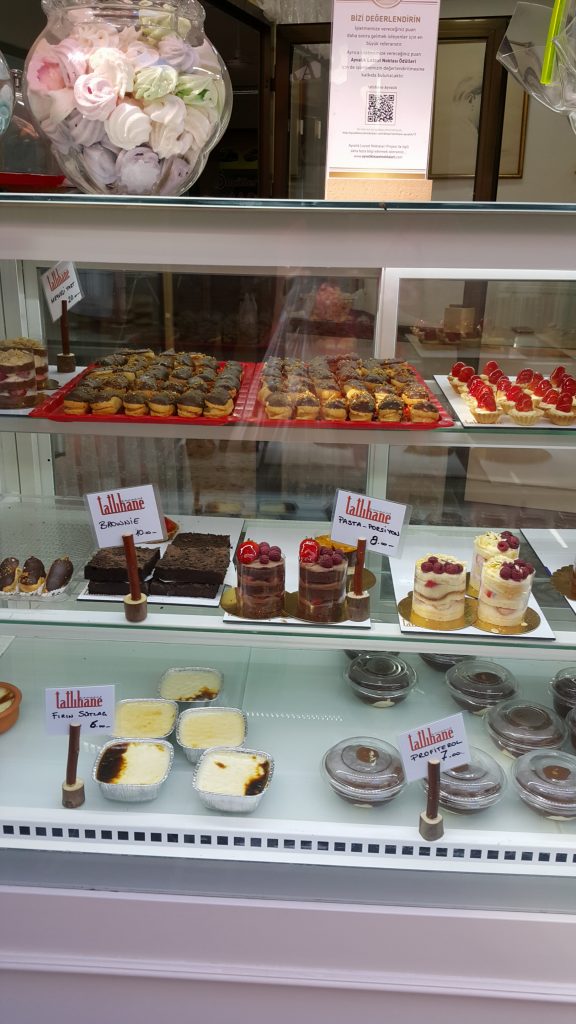 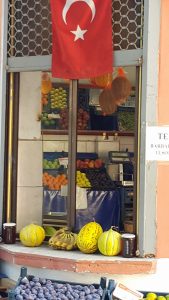 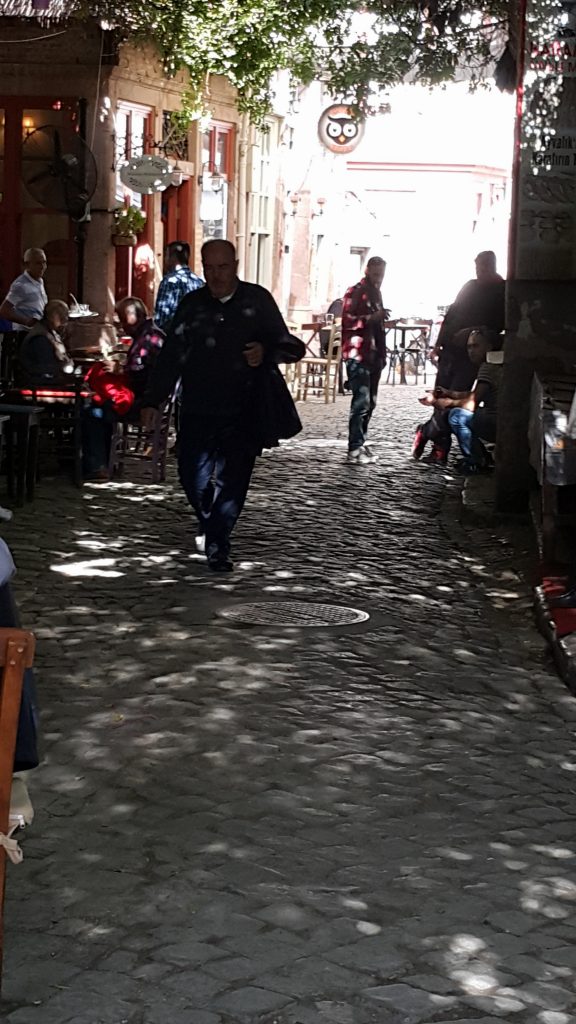 Cafes and tea houses along the streets 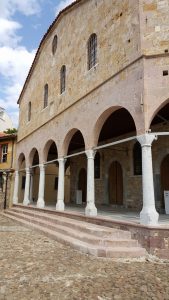 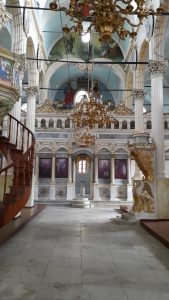 Tolun insisted we climb up the hill where he wanted to show me something. After several unsuccessful attempts at getting the right direction from google maps, he just followed his instinct and we arrived quite near the top of the hill at a lovely old Greek church, now a museum. Taksiyarhis church was the first church of Ayvalik. We rested on the bench in the spacious courtyard with tall and broad leafy trees (Mulberry or plane trees maybe) and took a look inside the small, quiet, colourfully decorated church, originating from the 15th century, later modified. We were the only visitors and it was nice to sit there, cool down from the heat outside and admire the beautiful artwork. Back outside, we walked downwards again, passing several mosques nearby which showed more sign of life, as it is nowadays predominantly Turkish (Muslim) town.

While strolling, the locals, sitting at the street cafes, drinking glasses of tea, playing backgammon or cards,  were eyeing us curiously. We didn’t look like locals, and they must have been wondering what the tourists were doing there off season. Ayvalik is known as a popular holiday resort, the usual 30 000 or so population grows considerably during
the summer months. It is mainly popular with Turkish city dwellers from cities like Istanbul, Izmir, who prefer to stay in small boutique hotels or rent a room or small apartment in the town.
There are daily boat trips to large Greek island of Lesbos which is rich in Antique history just as the whole Aegean area. Troy, Pergamon, Mount Ida, are few of the famous places from Antique Greek times which are within a short driving distance from Ayvalik. There is also a nearly 30 kilometres long sandy beach nearby but I have yet to explore the Ayvalik side of it. I have, however, visited the small island of Cunda. 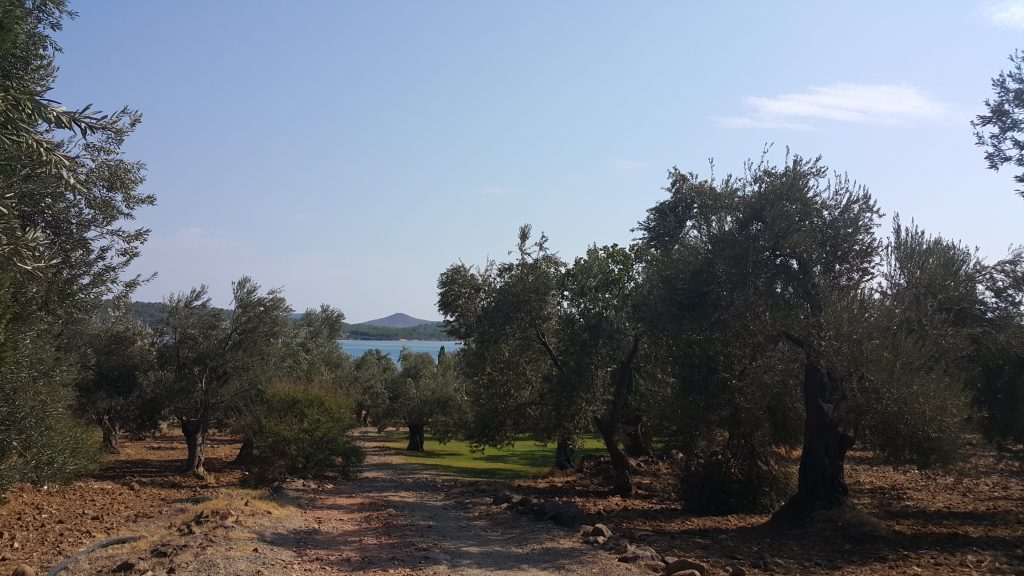 One summer day Tolun offered to take me to some quiet spot for swimming. He loaded his bike in the van and off we went. We drove to Ayvalik and from there, crossed the bridge and  landed in Cunda. Then we passed through the main street where I couldn’t resist stepping into an antique shop, filled with probably Ottoman as well as post-Ottoman furnishings and porcelain.

We continued past the buildings and drove along the dirt track through olive groves, extending right up to the sea. The road eventually became too narrow for the van. We stopped the car and got on the bike. Well, Tolun was riding the bike, while I preferred walking to getting bruised on the back of the bike on a very bumpy road. We glimpsed the sea past the olive trees and walked right towards it. Eventually the trees ended at the gravelly and grassy patch, and the turquoise waters began. There was no one to be seen except the holiday sailing boat in the distance. The waters were shallow at the shore, we walked deeper and deeper, and the water remained as transparent as at the shallow end. What a delight to cool off in the refreshing crystal clear sea, gently waving and glistening in the sunshine. It felt so far from civilization, yet so near as we knew the town was a mere minutes drive away…

But back to olives. Ayvalik and its surroundings are known for high quality olives and as an olive oil producing area. We, too, stopped at one small shop and bought a bottle of locally made superior quality olive oil. We also sat at the spacious red brick walled cafe, converted from the old olive oil factory, the chimney still intact. So it is not surprising that you can buy many olive based products here, including soaps and beauty products etc. In Turkey generally, it is usual to see many varieties of differently prepared olives in grocery stores, supermarkets, bazaars. To me, they all taste great, but Turks themselves make the differerence between good and not so good olives. And what better place than Ayvalik to be acquainted with some great quality olives and everything else that can be produced from it! 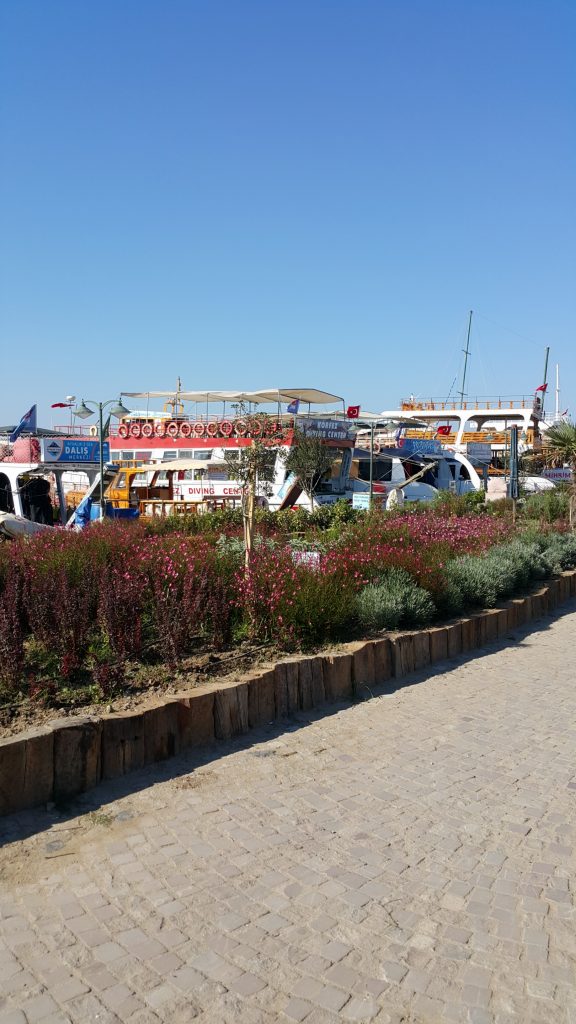