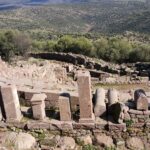 We visited Aigai – a Greek and Roman antique city ruins a few days ago in February. It was a very pleasant time for a walkabout. The weather was sunny as usual in Turkey, but the temperature was cool enough to enjoy the walk among the ruins. The city buildings were scattered around quite a large area on top of the mountain. The views to the surrounding mountains, valleys and the rivers down below were magnificent. I was surprised to see so many oak trees at the site, some of them really large and impressive.

Aigai was the city situated high up on Mount Yunt (Aspordeon), in the region called Aeolia, currently within the borders of Manisa. Around 700 BC Aeolians, who had migrated to the area along the coast between Izmir and Canakkale, founded the city. It became a part of the Lydian Empire and then the Achaemenid Empire. By 3rd century BC it was incorporated into Kingdom of Pergamon, which in turn later became a part of Roman Empire. It seems that the city particularly prospered in times of the Pergamon Kingdom as some large monumental structures were built at that time.

Goats played a major part in the lives of the citizens here. The coins minted by Aigai had goats on them as a symbol of the city. People here owned herds of goats which is not surprising as the rocky terrain looks ideal for these animals. Even today we can see goats climbing the mountains around the villages in the area. The city was known for the goods produced from goat hair, skin and bones. It is thought that the parchment made here was also used in the famous Pergamon Library. As natural to this part of the world, wine was also produced.

Archaeological excavations have unearthed the ruins of a district of the city where the industrial workshops were located. There are nearly 30 two-storied structures of interconnected rooms. Public latrines are also visible and its urine and faeces were likely used for textile and leather production.

Perhaps the most interesting part of this city for me was to learn about their water use. Usually in those times water was supplied by aqueducts and pipes from higher mountains, but here such sources were not available. There are rivers flowing around the mountains down at the bottom of the valleys but it was too costly and inconvenient to haul the water up from there. So according to the information stands at the site the solution was found in rainwater.

There are hundreds of cisterns carved in the rocks all over the city area. Rainwater was collected from the roofs, courtyards and streets by the intricate infrastructure of terracotta pipes and channels running under pavements and roads leading to cisterns. The cisterns were in various sizes, some for private properties, some for public use. Even the two public baths of the city operated only on rainwater. We can say not a drop of rain was wasted. Now this is something we can learn from in the 21st century!

Here the Gymnasion, the Gymnasion Bath and the Theatre are located next to each other. Gymnasion was essential for mental and physical education. There were classrooms as well as palaestrae in the middle of the gymnasia for physical exercise such as wrestling. The baths were right next to it to wash off after exercise.

Next to these was the theatre of which the seating area and the stage are largely in ruins except for Vomitorium. Vomitorium is the entrance as well as the exit of the theatre from which the spectators are ‘vomited’ out. Here it is an impressive arched tall passageway which has remained in good condition.

A short walk from the theatre is the Sanctuary of Athena. Athena, Zeus and Apollo were revered the most. Athena Temple is of Doric style and stands above the city centre. A Temple for Apollo was built down by the river a few kilometres from the city centre.

Bouleterion was the building were the City Council gathered. The front of the building was three stories high and faced the Agora Street. There there marble statues and probably the Prytaneion, where councilors had their workrooms and the sacred fire was kept. The meeting hall had the capacity for 200 councilors with semicircular rows of seats.

Agora was built on different levels due to sloping terrain. The commercial market was on the lower level and the plateau on the higher level was meant for social and political gatherings. Between the upper and lower agoras was a three storey building. The shops were located on the same level as the commercial agora. The top floor of the building opened to upper agora as a stoa – a gallery with columns. I can imagine how fascinating both architecturally and practically this hub of daily activity must have been.

The city centre was surrounded by the wall and the road through one of the city gates leads up to the upper Agora. The inscription has been found on the site which thanked Roman Emperor Tiberius for his help. The same inscription was also used by other Lydian cities which were damaged during the earthquake in 17 AD. Therefore it is concluded that the city was destroyed by that earthquake and received aid for reconstruction.

Nowadays the hustle and bustle of the city is replaced by goats peacefully grazing among the ruins. The people have abandoned this once magnificent city long ago, but the goats that gave sustenance to it, remain to this day.