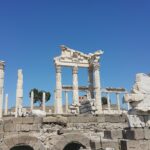 While driving southwards from Istanbul we stopped by the magnificent Iznik lake with mesmerisingly beautiful blue water. It is not surprising that a long time ago people decided to settle in this gorgeous place and build a city here. The earliest tale of Iznik is a bit unclear. Lysimachus took the the town from Antigonus after winning the Battle of Ipsus in 301 BC. Then he named this Bithynian town after his wife Nicaea.

In Roman times Nicaea was an important city. In the middle of the town people could see all four gates to the city as the main streets form a cross with end points at the gates and middle point at the city centre. This was a typical Hellenistic way of city planning.

In the 4th century the Emperor Constantine the Great assembled the first Ecumenical Council in Nicaea. He and other leaders of Christianity wanted to bring consensus to the church in the first time of Christianity’s history. Here they wrote the Nicene Creed, a unified declaration and summary of Christian doctrine. We saw the ruins of the Senat’s Court where the council is thought to be gathered at the shore of the lake.

After suffering two earthquakes and the competition from rising power of Constantinople, Nicaea started to lose its significance. Its thick walls, however, and the gates, have largely remained intact to this day. We found the Lefke gate to be especially impressive, with the aqueduct attached to it. In the 2nd century AD the Roman Emperor Hadrian commissioned the aqueduct to be constructed and it has been operational until the 20th century! The walls of the city are very well preserved and they are built in similar manner to Constantinople walls with red bricks and stone.

Recently, in 2014, a sunken basilica near the shore of the lake was discovered. This is a remarkable contribution to the history of Iznik. The church is believed to be built in the late 4th century, but probably the earthquake in 740 AD destroyed it and it sank into the lake. There are plans to create an underwater museum there.

Few centuries went by and Nicaea saw an earthquake and attacks by Muslims among other events. Yet again its importance increased in the 8th century when the Seventh Ecumenical Council gathered here, also called Second Council of Nicaea. Prominent members of the Christian religion convened at the Hagia Sophia church with the aim to condemn the Byzantine iconoclasm. Emperor Constantine V banned veneration of icons and the council intended to get the ban abolished. The pope eventually formally approved the council’s decree to restore veneration of icons.

Nicaea became an important administrative and trading centre again. In the 10th and 11th centuries it became a base for rebellions against Constantinople, fell briefly under Seljuk Turks’ rule, but returned to Byzantine rule again in less than 20 years later.

Crusaders conquered Constantinople in 1204, but Nicaea managed to remain autonomous. Four years later Theodore Laskaris founded Empire of Nicaea where also exiled Patriarchate of Constantinople resided. For half a century Nicaea enjoyed the prominent position, until Byzantines recaptured Constantinople. After that the city began to decline again.

Ottomans conquered Nicaea in 1331. They changed the name of the town to Iznik and for a while it became their capital. This was a notable milestone in the history of Iznik. Ottomans converted Hagia Sophia church into a mosque and started to construct other Islamic buildings. After the Ottoman conquest of Constantinople in 1453, however, Iznik lost its capital status.

In the 16th and 17th century Iznik became to be known for its pottery and tile making. The first time I heard of Iznik tiles was years ago when I visited famous Sultan Ahmed Mosque aka Blue Mosque in Istanbul. Perhaps this is the most known landmark where Iznik tiles decorate the building . Indeed, it is called Blue Mosque because of the striking effect the beautiful mainly blue and white intricately patterned tiles have on the walls of the mosque. However, before Blue Mosque was built, Iznik tiles were used in decoration of many other mosques and imperial buildings in Istanbul, Bursa and other towns. Famous architect Mimar Sinan designed many of those buildings . One such well-known construction is Suleymaniye Mosque in Istanbul, built in 1555.

Iznik tiles were painted mainly in dark blue, turquoise, coral red and emerald green colours on the white base and underglazed. The complicated process produced unique tiles which are up to 80 per cent composed of quartz and quartzite. Nowadays there are works underway to revive the old techniques of Iznik tile and pottery making. There are art centres and souvenir shops in the town selling beautiful Iznik pottery.

Before we departed this wonderful town we stopped again by the lake for a short walk by the beach. The setting was just breathtakingly beautiful! The green grass next to brilliant blue waters…very soothing. Although these days Iznik is a small town in terms of population, its cultural and historical heritage makes it a great city worthy of visit by any art and history lover.